How is it that a little thing started by just one person can mean so much for others’ quality of life?

The story of ridding O’Shaughnessy Avenue of industrial blight began with one resident who was flummoxed by a situation and contacted us. 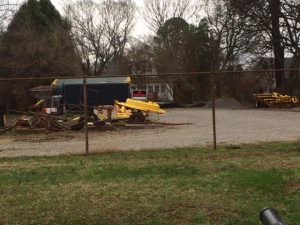 I’m proud to relay another story of another one resident’s initiative and great customer service from our partners at “city hall”.  It’s not about politics, it’s about the business of building a quality of life that we want in our community.

The long, deep parking lot at the Oak Park baseball fields is an invitation for all sorts of hanky-panky, switch-a-rooing and fence-vaulting into the adjacent back yards.  Evan Smith was diligent about calling 256-722-7100 to ask the HPD to shoo the cars out of the park after dark and investigate unusual behavior during the day.  After a month of surveillance, Evan felt alone in the endeavor and was tired of the pattern. 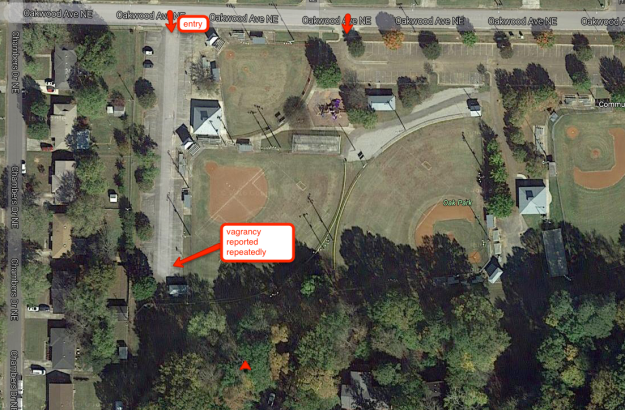 Smart man that he is, Evan asked for help, because at least two heads are, actually, better than one.  We contacted James Gossett of Parks and Rec and Captain DeWayne MacCarver, south precinct HPD, and described the predicament.  They looked at the records of calls for HPD service and agreed that it was time to put up a barrier at this site.  We dreamed of an iron arm controlled by a timer and realized that a chain and lock would suffice for now.  And who would put it up and take it down?  Evan agreed to invest more of his time and manage a team of gate-keepers, the neighbors from the adjacent homes.  Parks and Rec made the next call and in just a few days, BAM!, General Services put up a sturdy barrier to make it very inconvenient for vehicles to enter after dark.  We were pleased. The galvanized chain was like Bruno, a burly bouncer at a bar, thick arms crossed and silent.  “Thou shalt NOT enter” Bruno announced.

After just few nights of dragging Bruno across the parking lot and trying to stretch the 80 pound mass, we realized that we needed to tweet the thang, i.e. find a sustainable solution.  Evan was willing to put money toward new materials, but this time we contacted General Services ourselves, described the situation, and “in no time atall”, Bruno was replaced with a  lighter, strong twisted cable.  The barrier is now like a lean, wise woman who spots a mischievous child reaching for an off-limits vase, her eyes inferring “don’t .even. think. about it”.  Just enough warning to still be effective.

We are happy to see neighbors taking action to create the quality of life they want on their street and calling us when they want help.  In this micro-project, residents are investing time and labor, the city invested time, labor, and materials.  Some day, for other improvements, residents may have to also invest money for materials.

What needs attention on your street? What ideas to you have for a public-private partnership?  If you don’t have an idea but you want to be counted among others who have confidence in our community, please JOIN your Association!

program at 7 p.m.  Don Webster of HEMSI will fill us in about the ripple effect of drug addiction in our community and what to do about it.

– Bring a neighbor! Free meeting. Contributions to become a member adds to the kitty for posters, feeding volunteers,  supporting the International Athletic League, our Police and Fire Dept, and Chapman School trips.   Membership also conveys the ability to vote on topics like the by-laws and officers.